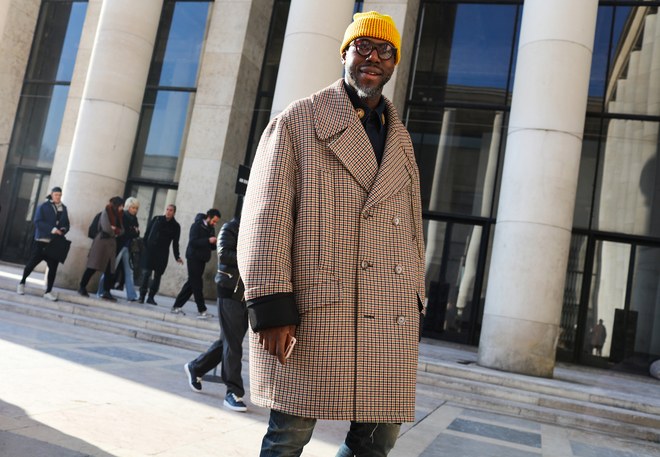 Raf Simons NYMFW Debut Is Going to Raise the Bar“I am extremely excited to see Raf Simons’s first collection designing for Calvin Klein, which is sure to be amazing. I had a sneak peek of the Raf Simons collection in Paris and he’s going to raise the bar of New York fashion now that he is designing and showing here. This season truly is all about Raf!”

The NYMFW Outfit Game Plan“Key words for NYFW dress code are au courant and comfortable. I am mentally coordinating some pieces/looks together in advance. Surprisingly, I have nothing that needs to be altered or cleaned. Also, I shave every two to three days and I cut my own hair. However, if time doesn’t permit you’ll see me wearing a beanie.”

’Tis the Season to Break Out the Fashion Heavy Hitters“I will definitely be wearing [my] Dries Van Noten coat and Y/ Project multi zipper bomber jacket. Also, I may wear a one-of-a-kind piece by Walid that I recently purchased in Paris. Two of my favorite statement pieces are a Raf Simons tweed coat and a Prada shearling from a couple of seasons ago. I have a real affinity for coats.”

Never Attend a Show Without:“The essentials I carry are cash, a cardholder, lip balm, a lighter, and my cell phone.”

Fashion Week Is All About Being Bad and Bougie“Childish Gambino said it best at the Golden Globes: ‘Bad & Boujee’ by Migos is the best song ever. Also, DJ Esco’s ‘Too Much Sauce’ featuring Future and Lil Uzi Vert bangs too!”

Front-Row Celeb Guest Must-See?“Hmmm. Is Kanye having a show this season?”

In-Between-Shows Eats“Sant Ambroeus is the best spot for coffee and a bite in between shows. I hope one day they’ll invite me to design a plate. Hint, hint!”

Karate and Eating Well Keeps the Fashion Week Edge Off“I keep my sanity in the midst of all the Fashion Week madness by catching up with friends, eating right, and having a session (or two) in Kyokushin.”